Tales from the  new West

It's been a while since I have had time to update my pages.  Spring was a busy time.  We finally made it out to our land in the Basin on Memorial Day.  It was freezing cold and quite wet.  Things really have not warmed up for any long period of time for the entire summer.  This is the end of July and while it is hot today, the forecast is for lower 80's next week.  My garden is doing pretty well, although no beans ever really came up.  I have root crops, zucchini and plants like tomatoes, but very little corn and no beans.  Peas are hanging in there, though the heat has really hit them the last couple of days.  Maybe the cool down will help.

The deer have become mostly nocturnal now, except a couple of mornings ago there was a buck with very large antlers, still in velvet, in our yard.  I took some film photos, but don't have them developed yet.  There is a small buck that sticks around my yard much of the time.  About three weeks ago, I went in the house for a moment while I left the garden gate open so I could return to weeding.  The buck had jumped inside the garden (the fence has a two foot "solid" part at the bottom to keep the rabbits out) while I was in the house.  I did get him to jump back out without damage to him or the fence, but you can be sure I now close the fence every time I leave!

I tried going on an Audubon "bioblitz" in June, but that turned out to be something that I am not well suited for.  I have gotten one sheet with species listed for plants, which will help me identify plants more accurately.  Since the Audubon trip was a wash, my husband and I went down to "the ranch" for day and did our own bioblitz.  I will be reporting on how many species of critters and animals we saw in that one day.  There is so much diversity in species on the open sagebrush plain, but years of being told that the forest was THE important thing to save, other environments get shorted and end up being forever modified.  I can now see over 30 wind turbines off the road I drive into my house on.  They are about 5 miles away, but being 200 to 400 feet tall, they show for a long ways.  I am not a fan of wind power.  Our local paper quoted a source that said a modern wind turbine contains 335 tons of steels, 4.7 tons of copper and three tons of aluminum.  That's PER turbine.  Multiply by 60 for the wind turbine cluster I can see.  Then there are the 60 or more I can see going into the Ranch.  How much greenhouse gas did we generate building these things?  How much did we generate pouring the concrete, grading the area, putting in roads (even if they are temporary), etc?  Upward to a hundred or more trucks run past our development every day, plus the big trucks carrying the turbine parts.  No matter how creative I get, the math does not add up.  Plus, there are many, many reports that the turbines don't produce nearly as much as the stated maximum.

Since I failed to outgrow my childhood fascination with nature and how it works, I have brought home several hera buck moth caterpillars to see if I can get them to hatch.  They are in a hopefully escape proof cage and I am feeding them the sagebruch they normally feed on in the basin.  I will have to leave them out this winter for them to pupate and winter over then hopefully hatch next summer.  The moths have an odd lifecycle that is affected by weather to what appears to be a large degree.  I am hoping to have success with the project.

The other "project" I have is a tomato hornworm which I found on a tomato plant I purchased in town.  The caterpillar appears to have dug down and pupated in the soil in the jar.  Now I just wait to see.  I suppose I could dig up the dirt and look for the pupae, but that takes all the fun out of the project!!

It's now starting August and I am obviously way behind on this!  The wind has come up every afternoon and gusted up to 50 or 60 mph.  Yesterday, it blew over my caterpillar enclosure, pulled a tarp off the wood pile and pulled clothes off the line.  We are also losing the ridge cap shingles on the garage.  Unfortunately, there is little rain and much lightening, raising the possibility of range fires.  So far, only very small fires have occurred. 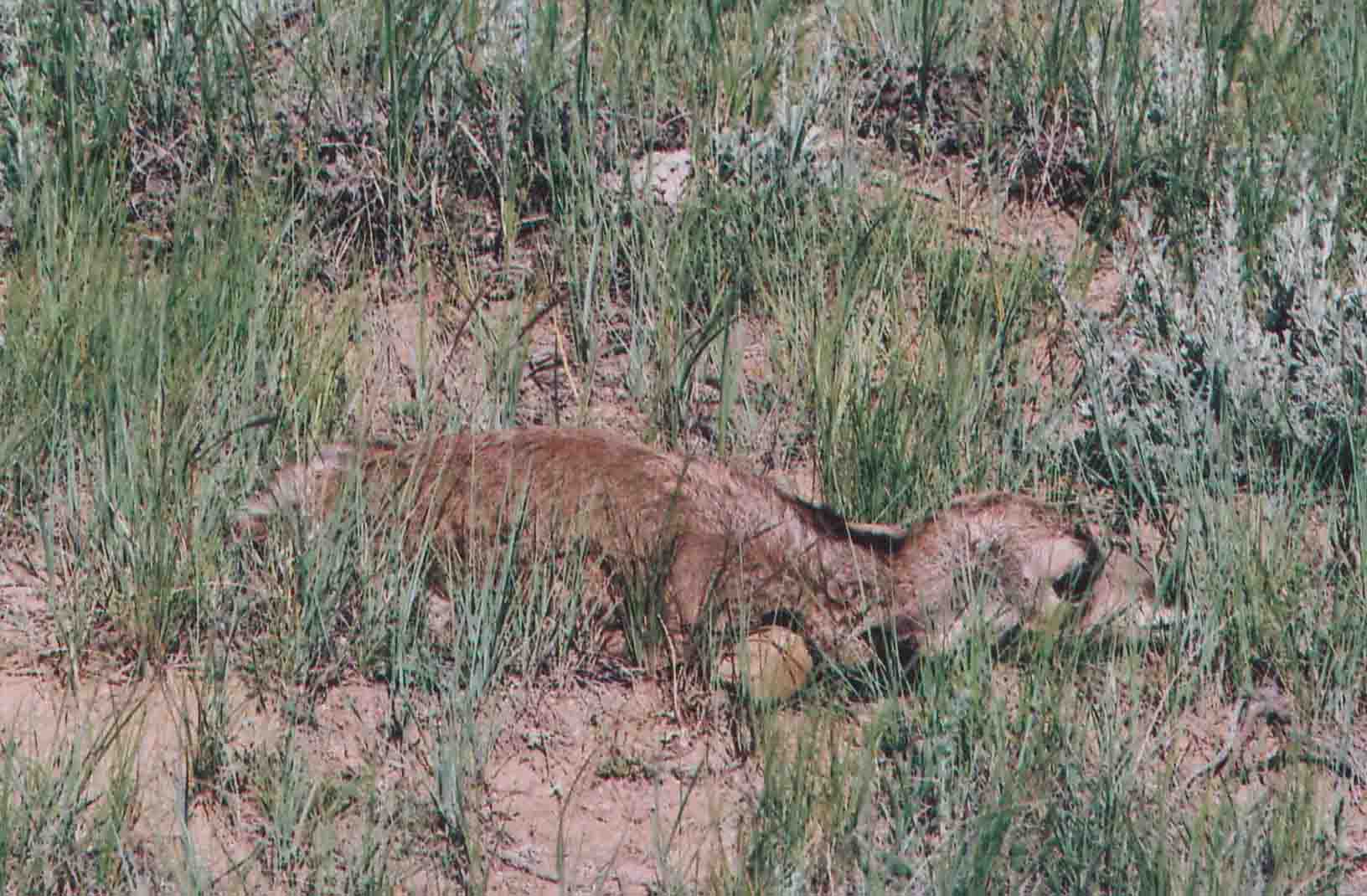 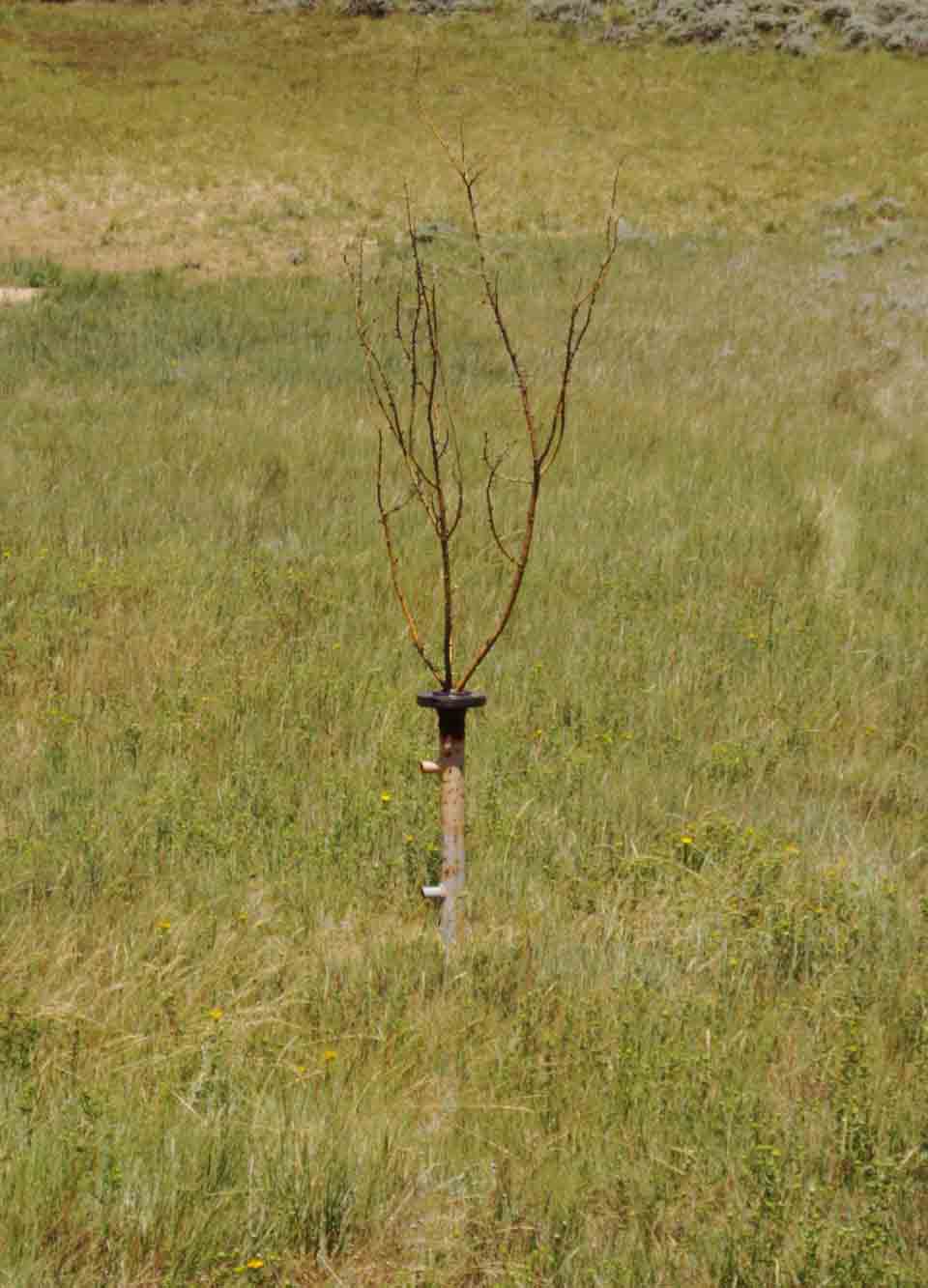 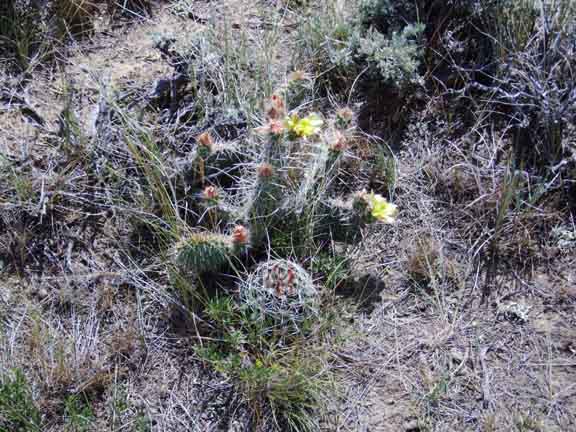 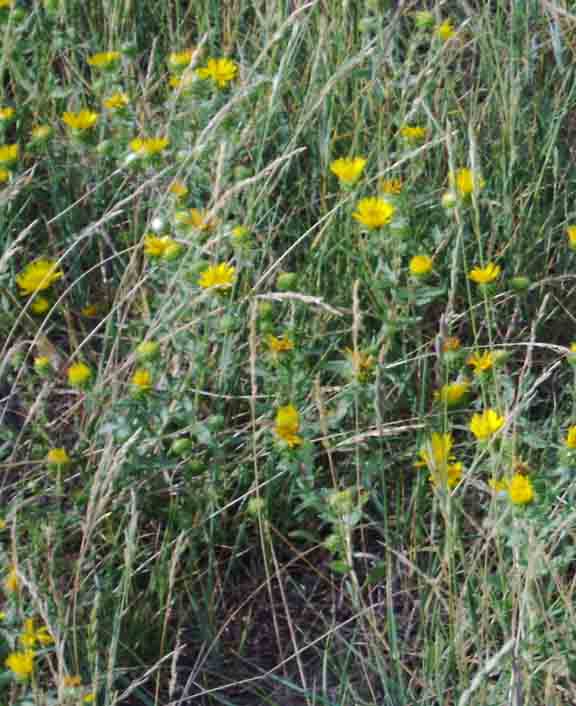 This is a baby antelope maybe 4 hours old.  He/she is lying flat to blend in with the area.  He laid down after crossing the road to find his mother.  He was so shaky on his feet, he could not run, so he laid down.  If you walk away from an antelope this tiny, you have to be really sure you can retrace your steps because the baby just blends into the background.

At the ranch, we put up "prairie art"--a piece of oil field pipe with a branch in it.  This is directly out the door of "the Hut".  We had a wire fence there, but no longer need it.  The birds had been sitting on the fence and watching us while we were inside the Hut.  This allows the birds to return to looking in on our activities and presumably watch for food of any kind!
This is curly cup gumweed. My last trip to the Basin taught me why curlycup gum weed has the name it does.  I had used a weed whip to cut some of the gumweed around the Hut.  Then, I later stepped on some of the cut weeds laying on the ground around the Hut.  It stuck to my shoe--REALLY stuck.  My husband and I had to use the weed whip to scrape these off the bottom of our shoes!  Even the flowers that were cut off were sticky.  And trying to pick up the cut ones by hand resulted in a sticky hand!  Amazing weed!
That's it for now.  I am returning to painting and gardening for a while.
Home Page                       Archived pages