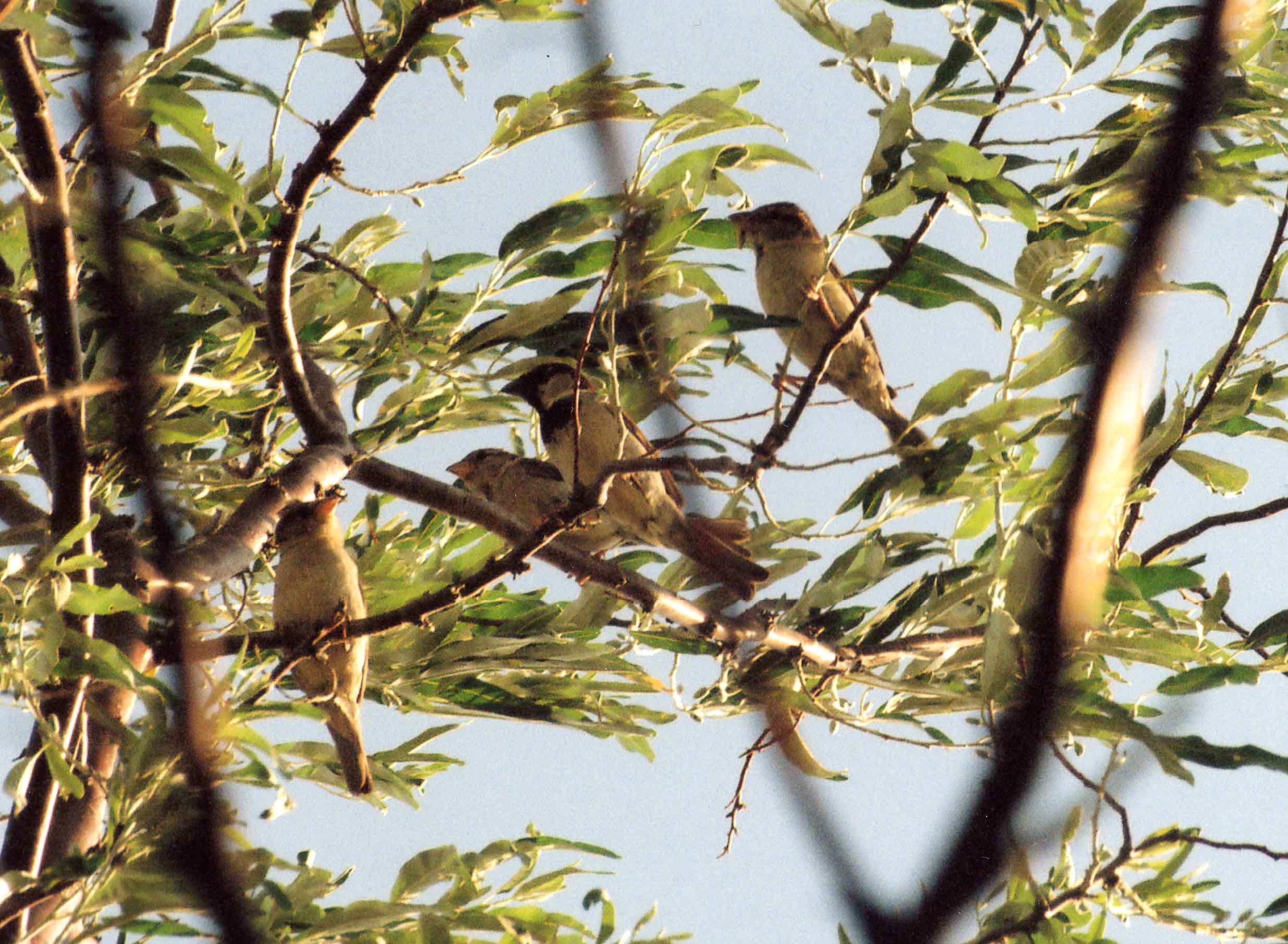 Tales from the new West

It is now the

end of July and I finally have caught up to where I can get some computer work done!

The garden is doing fairly well. There were two or three hailstorms that were hard on it, but those seem to
have passed now. I took a picture of a rainbow with hail falling in the foreground of the photo. That's not
very common out here.

The rain we were getting early on has stopped for now and we are entering "brown" season. Everything that
was green a couple of weeks ago is now well on it's way to brown or tan. The temperatures are in the 90's
and the humidity is under 20%. Excellent weather for prairie and forest fires. So far, we have been fortunate
and there have been few fires, none of them large. That will probably change as we move into August.

We have made it out to the ranch a few times. The camper is set up out there for the remainder of the summer.
It was necessary to glue down some shingles on the Hut and the outhouse got a second layer of shingles.
Wind over the winter tore some of the outhouse shingles off entirely. Plus, dirt had started blowing in
underneath the outhouse and filling the hole, so I had to put more boards around the house and fill in with
dirt. This happened the first year we were out at the Ranch and I thought I had solved the problem with
chicken wire around the outhouse to keep critters from digging in. Next year I will probably add fiberglass
all around to help keep

any openings from forming. While outhouses are obviously nothing new, there are
all kinds of interesting issues that arrive when maintaining one, especially on a windy, open plain.

Technically, I am into August, but I wanted to add a really interesting event from
yesterday. I was out mowing the grass in our largest windbreak when I noticed
a nighthawk sitting on the garden fence, maybe 20 feet from where I was mowing.
The bird sat and watched me mow for most of 45 minutes, only moving from the
garden fence to a wire fence around a nearby tree. This is the first time we have
seen nighthawks sitting on fences and posts in the daytime, and they seem
remarkably calm and not bothered by activity. I found it amazing a bird would sit
so still for so long. 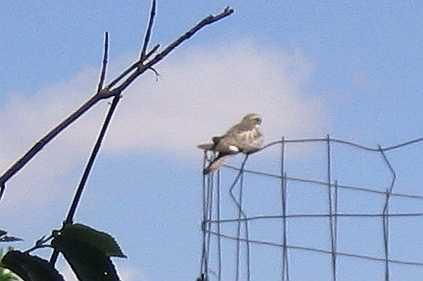 Too brave a bunny

I have taken many pictures this summer of wildlife and wildflowers. The early rain gave us beautiful flowers.
Identification of all of the species is taking time, as is finding a system for filing the pictures. Several of the
wildflower books I use for identification were written by photographers, and I am starting to understand why.
By the time one figures out the names and species of each photographed flower, a book sort of follows
naturally. Not that I intend to take up writing any type of flower identification book, but I can see how one
gets to that point.

Critters abound in the yard right now. The deer are mostly nocturnal at this point, and after I sprayed the
trees with deer repellent, they don't seem to come around as much. I did fill a five gallon bucket with water
today and put it outside my fence. Several times in dry years we have had antelope try to get into our yard
looking for water. Since antelope are not accomplished jumpers, they have a tough time getting past the
fence. One year a doe and three fawns tried for several hours to figure out a way to get into my yard and
get to the sprinkler. I started putting the bucket on the outside of the fence and that helped.

Birds are the big thing this year. We seem to have a large number of western kingbirds that are all "chattering"
at each other and at the sparrows. These are noisy birds but they do have a cute habit of hovering in the air
and scolding each other! I have not seen any house wrens or northern shrikes to date. There are starlings,
killdeer, sparrows, kingbirds, nighthawks and a grosbeak or two. Birds are more difficult to photograph than
I would have imagined, in part because they don't stick around long when they spot you and in part because
you usually see them from the underside! I'm working on the technique...

Summer heat seems to have set in, which limits my outdoor activities to early morning, and limits the number
of trips to the Ranch because I have not yet figured out how to construct a 12 volt swamp cooler and how
much water I would need to haul to the Ranch in order to stay cool. This does give me time to catch up on
my computer work and I can photograph around the yard. It's also "brown" season now. The grass went
from green to brown in about three days. This is actually quite typical for Wyoming. It rarely stays green
beyond the end of July. That's when the heats cranks up and afternoon showers become more scarce.
I still mow my lawn, but I cut it as tall as the mower allows. Mostly, I mow off the dead cheat grass and other
prairie grasses to slow fires. The buffalo grass has really come back this year, as has the sagebrush, due to
the early summer rain. It is nice to have grass and not just weeds for a yard this year! 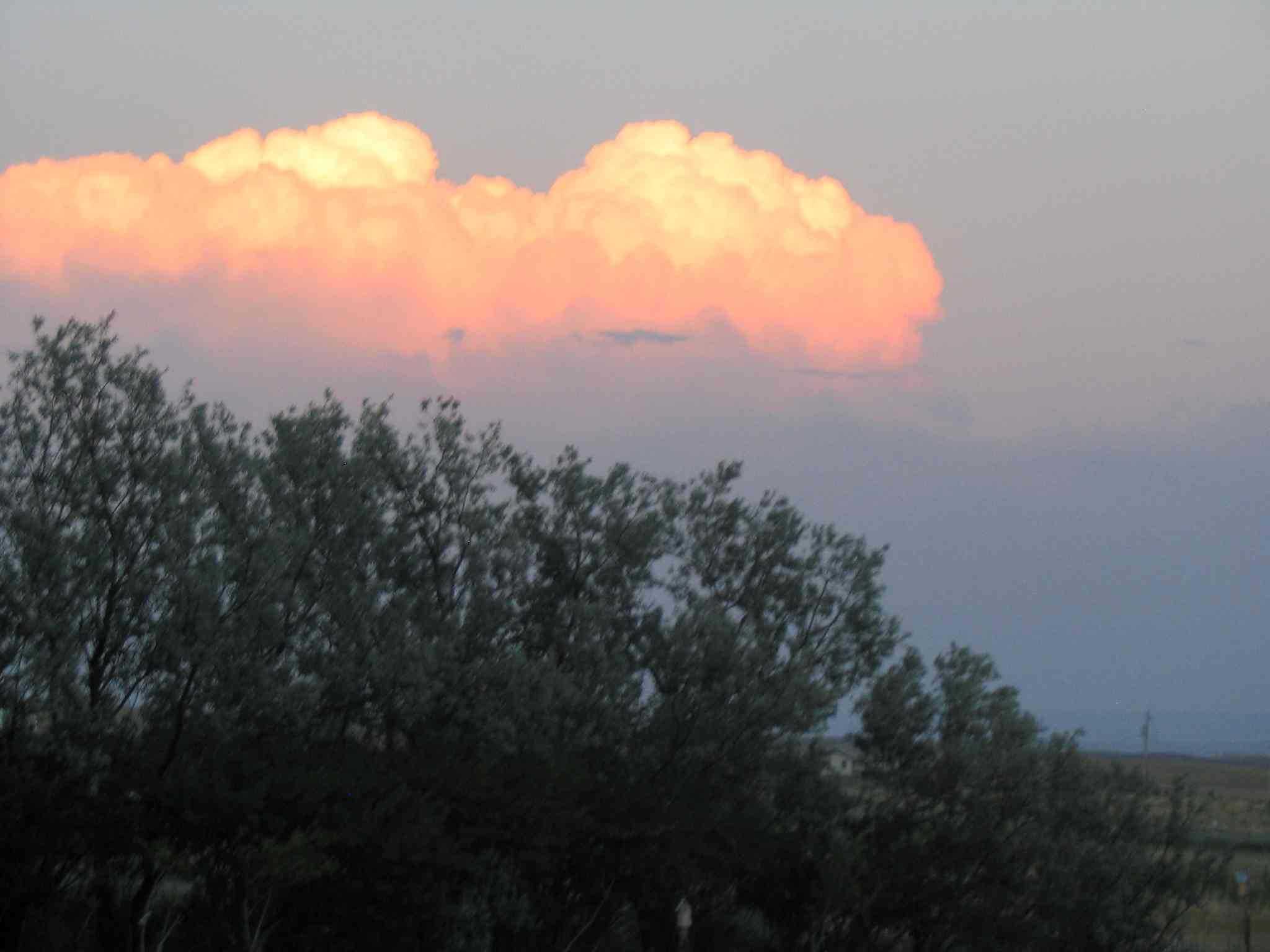