Tales from the new West-April 2008

This is probably the closest thing to a "blog" page that will be found in my website. It's my conversations
and thoughts and adventures living on the prairies of Wyoming. I'll date the information where I can.
I considered calling this page "Home on the Wind Ravaged Prairie" because it's been the most notable
weather feature this winter. Actually, the wind does blow much of the time in Wyoming, but this year,
the wind blows nearly every day and often exceeds 50 mph. The shingles get pulled off, there are dust
storms and walking can sometimes be a challenge. The constant battering of the wind can also make
people rather cranky at times.

Today is the 20th of April. My husband and I are building bird houses today. There are a large number
of cats in our area and last year one killed the baby robins in the poplar tree nest. According to what I
could find, robins don't really nest in houses, so I will have to find a way to keep cats from climbing the
tree. Maybe the fiberglass I put around the garden will work.

We had another one of those interesting wildlife moments when my husband went out behind the garden
to check the skunk trap. He failed to make enough noise going out and startled a deer laying in the garden.
The deer panicked, crashed into the fence in a couple of places, then hit the fence hard enough to take out
a section. I thought about closing the gate to the garden to keep the deer out, but now that there's an
opening on each end, it no longer seems necessary.....I'll be fence building before I put in a garden.

Monday, April 21st. We finished most of the bird houses. I am trying to decide if I want to build a house
sized for the Northern Flicker. We have seen a few of these birds around here, but not many. I guess
another species could inhabit the house if no flickers are around. Last year, sparrows took over the one
house I put up. This year, I sized two of the boxes for wrens and then three are just a generic size. Not
being familiar with which birds will nest in boxes and which will not, it's kind of a guessing game.

Tuesday, April 22nd. The wind picked up today but I am still going to put out the bird houses. The deer
have been outside my kitchen and bedroom windows for the past two days. The bucks are starting to
get nubby little atlers. There are over two dozen in the herd and they have become more active with the
warmer weather. There are two bucks staying in my windbreak much of the day.

The thirteen striped gopher has returned. Actually, there are at least two and probably three of these
critters in my yard. 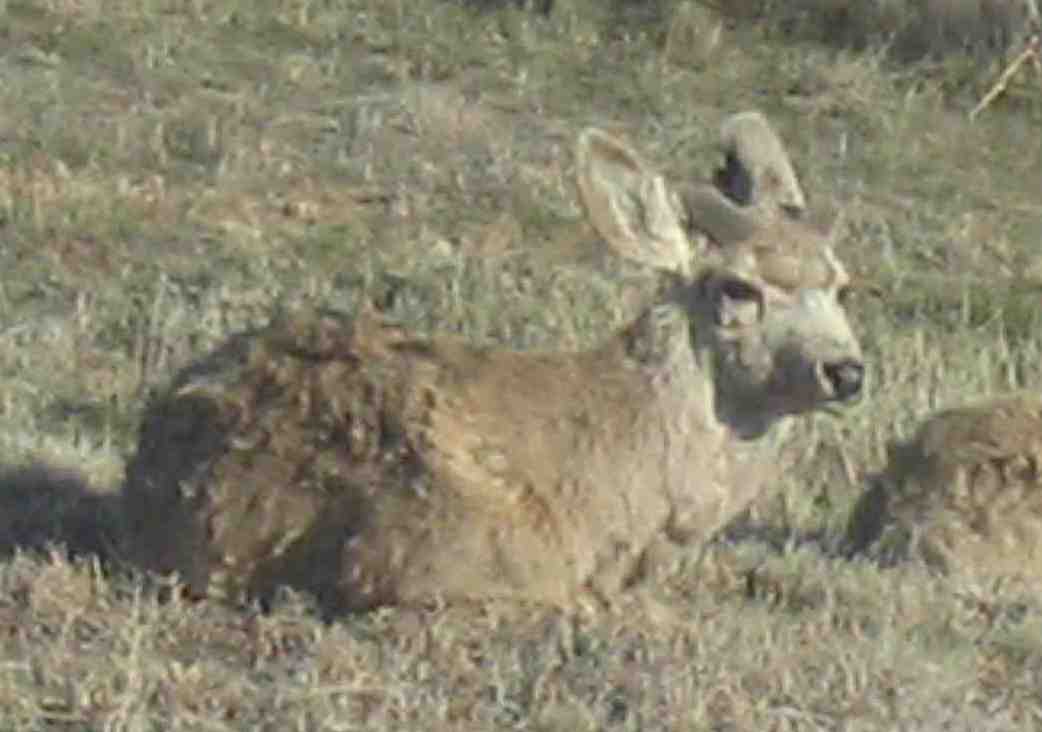 Friday, April 25th. It snowed yesterday. Spring comes quite late in Wyoming. Snow is forecast again
tonight and there were a few flakes this afternoon. I say the first tiny bunny of this "spring". Actually, I
saw one yesterday and today I found there are two. They are very skittish but I did manage to get a
couple of photos. The striped gophers were also out earlier running from my east yard to the north
yard and into the well house.

I am signing off for now. I will update this page as time allows. Hope you enjoyed reading it! 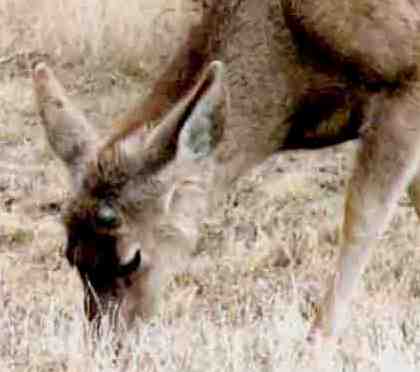 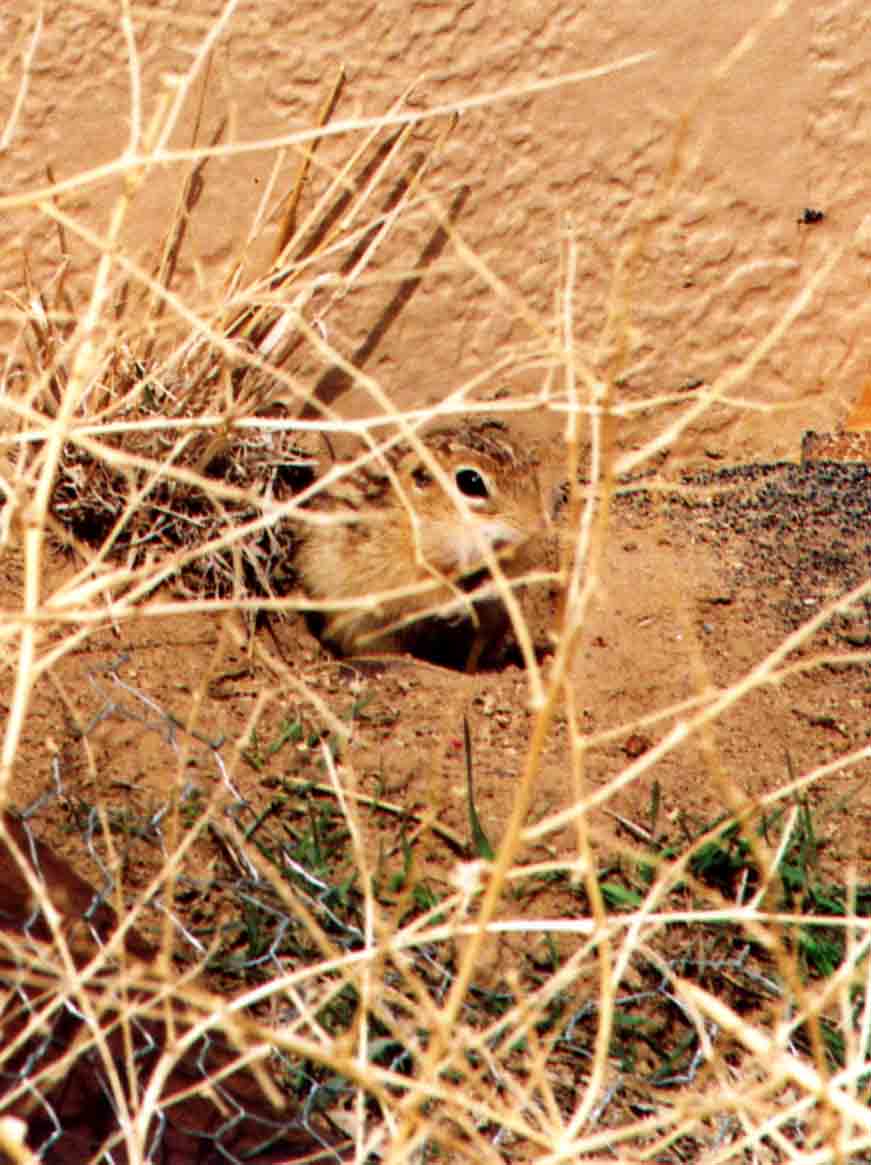 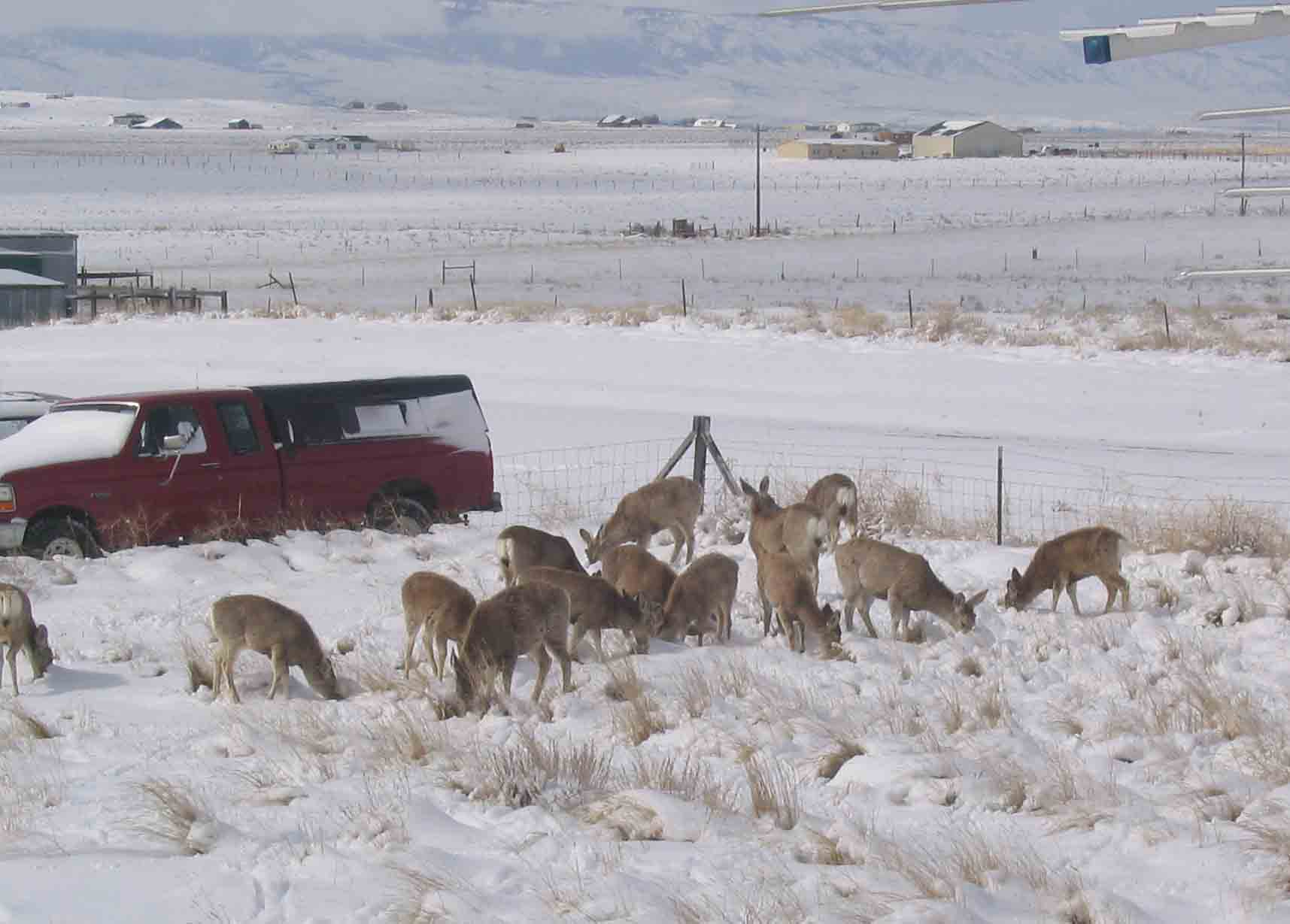 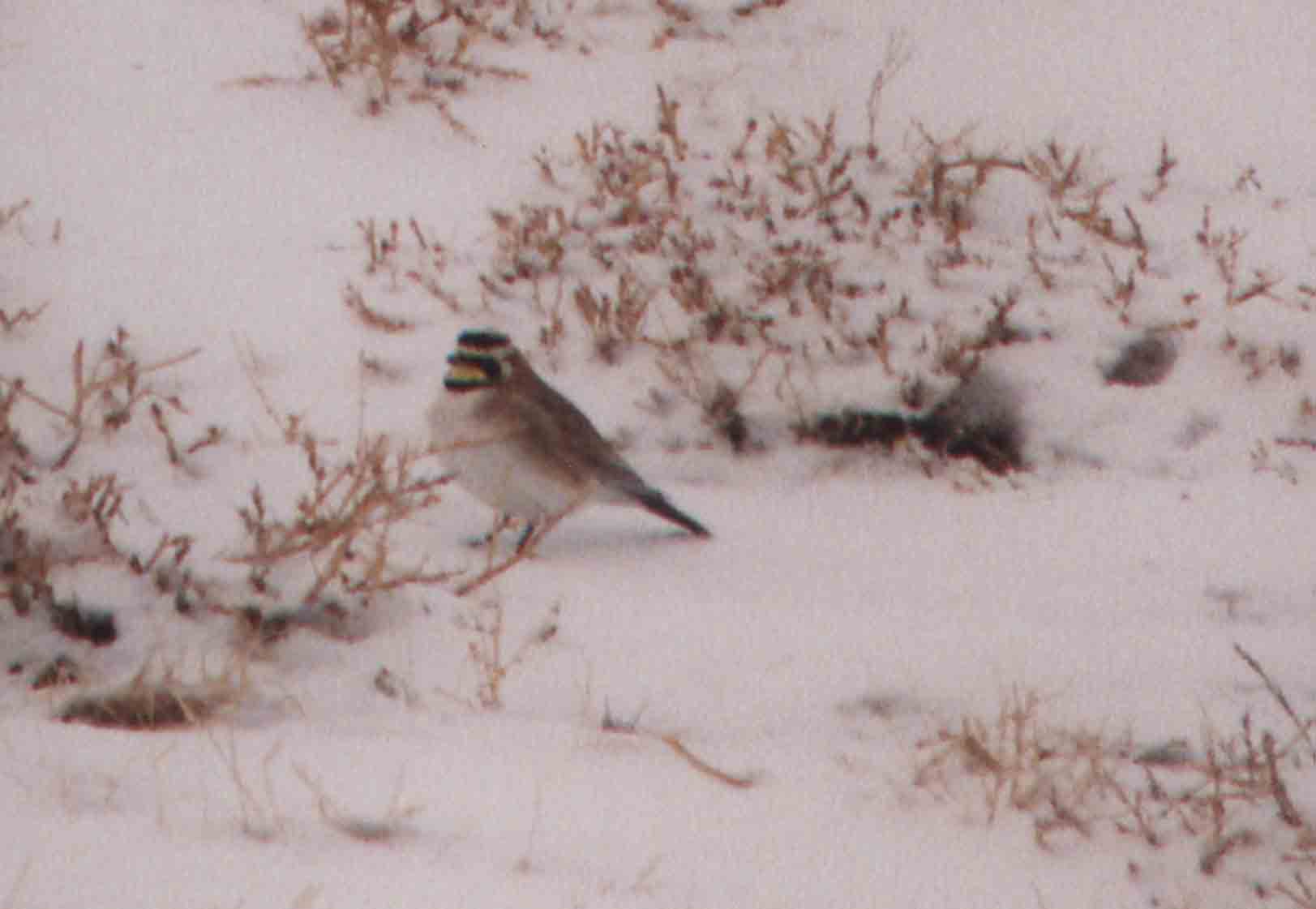 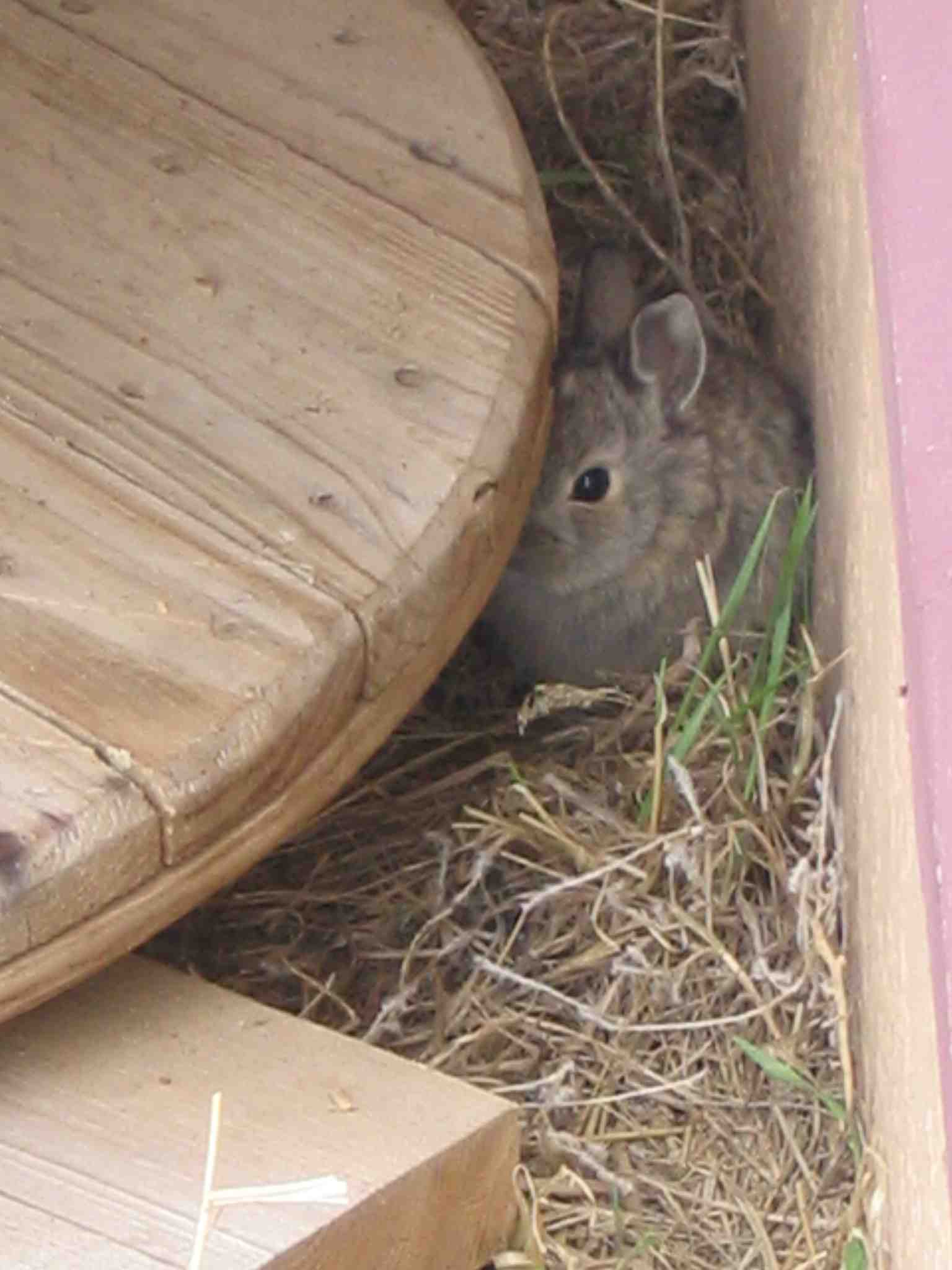 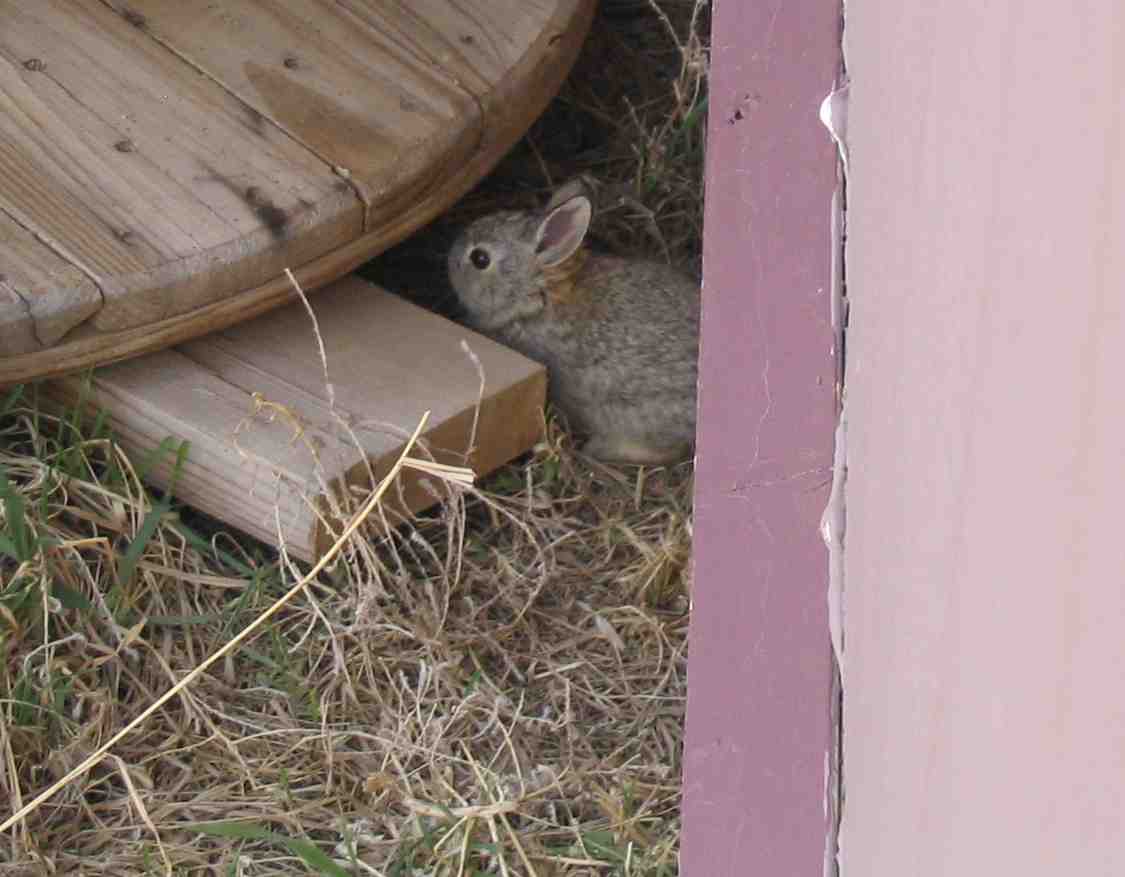 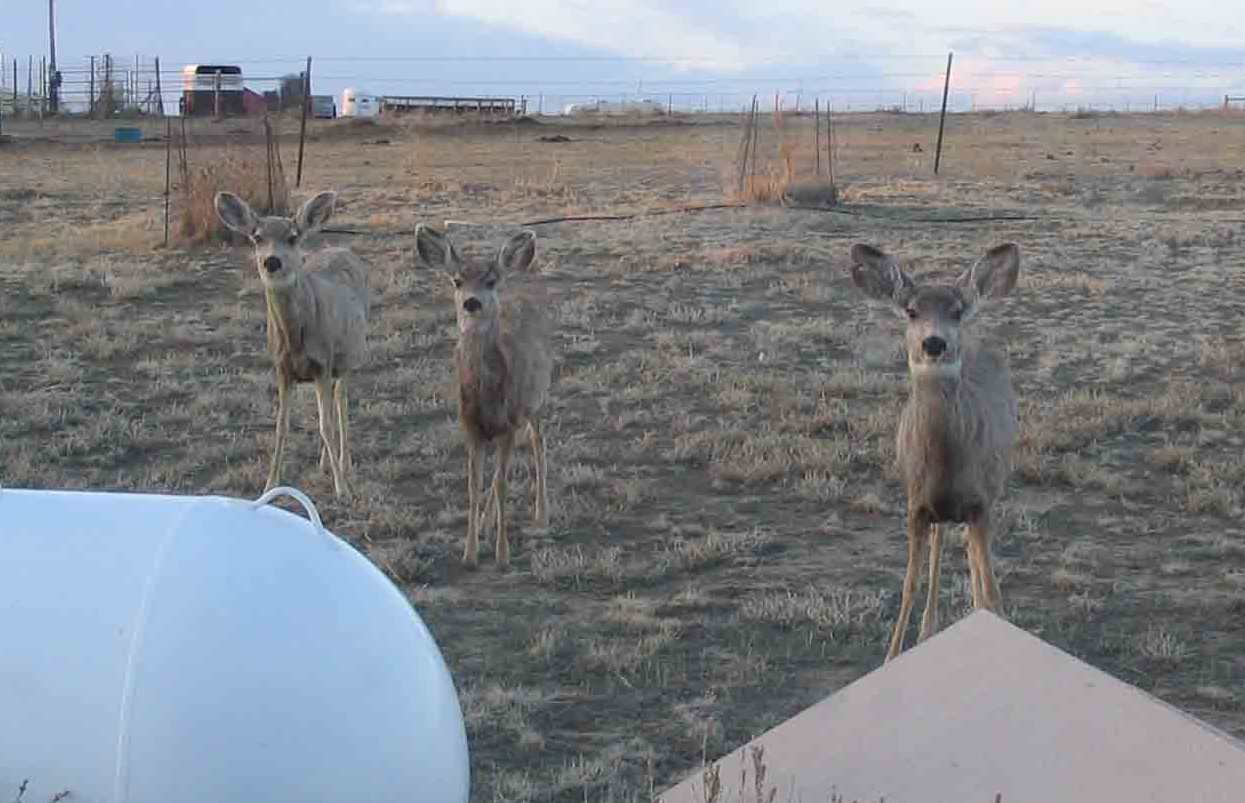 Does looking in my door!

Napping in the Trees